Ahead of you, you see a path. Swipe up/right towards the next square-shaped marker to walk along the four squared and when you reach the bend swipe down/right. You will reach a pit. By swiping down/right again Lara will hang from the ledge. By swiping downwards you choose to descend. Continue swiping down, to reach the bottom. Swipe right, following the path.
The Gilded Skull Fragment: You approach a sparkling vase, this holds a fragment of "The Gilded Skull" (1/4), which you collect by tapping it. [Note] (The next relic is directly beneath you, but I will steer you closer first.)
Swipe down to descend to the lower level. Here you need to traverse right, before going further down, to reach the spot where a second vase is waiting.
Quartz: Tap the sparkling vase right next to Lara, on the left, to collect the Quartz (1/6).
Continue to the right. The second tile on the floor is a special exit tile. Step on it and Lara will advance to the next area.
X

To collect a relic you do not have to be close by. Most of the time you can not even reach the area where it is. You can tap it whenever it is visible on the screen to collect it. Keep an eye out for the sparkling vases. Sometimes they are hidden behind environmental elements and can only be spotted when you stand at a certain spot on the map, or when a movable platform is at a certain location.

Swipe right and you will notice that the path ahead could continue if part of the bridge weren't missing. Climb up, to where a Lever Switch is. You have to stand next to it, to pull it by tapping it. The missing part of the bridge appears from underneath. Climb down and cross it.
Quartz: On the left is the next Quartz (2/6) in its vase.
The Gilded Skull Fragment: Further up and right is another vase near a currently unreachable lever switch. Tap it to find the fragment of "The Gilded Skull" (2/4).
At the T-junction you don't have much choice, the path ahead only has an orange bridge part (#1) so head down to the orange Lever Switch (#1). If you pull it, the bridge part (#1) disappears and another orange bridge part (#2) appears, enabling you to get to the next khaki-coloured Lever Switch (#2). Pull this and a khaki-coloured bridge part (#3) appears. Return to orange Lever Switch (#1), to pull it again and bring up the other orange bridge part (#1) again. Now (#1) and (#3) are in place, enabling you to reach the grey Lever Switch (#3). Flip it to bring up a larger grey bridge (#4). Then head across the new bridge to the exit square. While exiting you can spot the Queen of Venom in the pit below you. 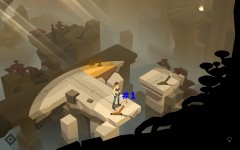 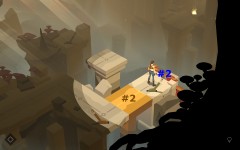 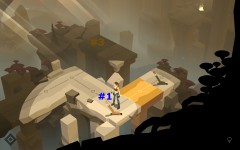 You come to a junction. Careful, ahead at the crossing you will find a Collapsible Floor, you can cross it once, but not twice. Step on it.
Relics: From here you can spot three vases. The first one is on the left side, up on a rock near the corner of the path, tap it, to collect the Quartz (3/6). The second is directly in front of Lara, at the right side of the screen. Tap it, to collect the Quartz (4/6) on a pillar in the chasm. The third and final one is harder to spot. It is at the right edge of the screen, almost invisible, a little below the previous one. Just tap it to collect a fragment of "The Gilded Skull" (3/4). [NOTE]
From the collapsible floor, move to the left. Then get to the spot underneath the wall and climb up, noting the collapsible part you cross. Flip the Lever Switch at the top to bring up a part of the walkway, then climb back down. The Collapsible Wall will now crumble and Lara drops down, fortunately unharmed. Cross the new bridge. Climb up the next wall and pull up onto the Collapsible Floor. Advance towards the Lever Switch and flip it. The walkway below changes position and you could advance. You can however not go back, due to the collapsible floor. Instead hang from the ledge and traverse sideways to the left, past the Collapsible Wall. Climb back down and follow the walkway around to the exit square.
X

You can step on it once, but stepping on it again will make the floor collapse and Lara will die.

The Collapsible Wall will work just like the Collapsible Floor, with the exception that Lara does not necessarily die. Lara can climb past it once, but on the second try the wall will collapse, sending Lara down into the abyss or simply onto a safe platform below it.

Note for "Collapsible Floor" and "Relic"

If you have trouble locating it, step to the right and stand on the square right next to the collapsing part. From here it should be easy to spot. Step further right and the relic would be hidden behind the cliff wall. On your way back you will find that the floor has become unstable and Lara will die when stepping on the tile again. The relic however remains collected. Start again and return to the crossing and the collapsible floor.

Step forward.
Relic: After your first step the first relic vase of the section becomes visible. Tap it in the left corner of the screen to get the final fragment of "The Gilded Skull" (4/4), thus unlocking the Bomber Jacket.
Next run towards the climbable wall.
Relic: At the bottom of the screen you can find the next Quartz (5/6) you can tap.
Now head up the wall. At the top you will find a Wall-Mounted Lever Switch. Flip it to lower the golden part of the wall. Get back down and climb up the adjacent golden wall. Since at the top you can not continue, you need to figure out a way by using the two levers. Climb up twice and then traverse to the right to reach the upper Wall-Mounted Lever Switch. Flip it to move the walkway below you over to the right, thus making it safe to climb back past the Collapsible Wall. Lara will drop down, but she won't get hurt.
Relic: At the bottom grab the final Quartz (6/6).
Now don't go over to the left again, because then you would damage the way out. Instead head right and simply climb up to the lower Wall-Mounted Lever Switch. Flip it and the golden wall part moves upwards. Had you come from the left, the Collapsible Wall would now send you down and you'd get stuck, but since you did not damage it yet, you are clear to go. Traverse left and head up the golden wall. At the top advance forward, stepping on another Collapsible Floor tile. Here the so called Queen of Venom makes its appearance again. Advance to the exit square.

A Key to an Unknown Gate

Step forwards to reach the pedestal and collect The Key of Snakes (Achievement). With the key in your possession, advance past the two crossings and towards the wall. Insert the key into the receptacle here and the door closest on the left side of the path opens. Step back and through the door to enter the Maze of Snakes.
© www.tombraidergirl.com Personal use only, no reproduction. Last changes: 03 Aug 2017, 03:25